In Watch of the Week, we invite HODINKEE staffers and friends to explain why they love a certain piece. This week's columnist is a watch collector and sporadic watch writer, contributing to publications like A Collected Man and Highsnobiety. He also writes a semi-regular newsletter called Rescapement – which we consider essential reading around HODINKEE HQ, and which you can subscribe to here.

Back in the more innocent times of 2016, a few years and many fewer watches ago, I was just a young graduate student with big dreams and small pockets. And I had my heart set on the Junghans Max Bill.

Rolex had always felt too ... Rolex. It fit on the wrists of suave urbanites like Roger Federer or a cashmere-clad Ben Clymer, but perhaps not on mine. Even then, I knew there had to be more to life at the other end of the spectrum than those fashion watches of the mid-2010s that need not be named. The clean, minimal aesthetic of the Max Bill — the same aesthetic perfected by all those direct-to-consumer brands following you around the internet trying to hawk furniture, mattresses, and juicers — immediately spoke to me, dutiful millennial that I was.

But, unlike those Instagram-advertising internet pests, the Junghans Max Bill immediately felt like something more. Soon enough, I tried one on and learned about “winding” a watch. Something you actually had to touch to get going, and my movements powered its movements? It felt less pest and more symbiosis, like Nemo and that Amnemonemomne.

It was also around this time that one Gary Shteyngart published an article, “Confessions of a Watch Geek,” in the esteemed pages of The New Yorker. Here was a writer — no, an author — telling the tale of how he’d fallen in love with this Junghans Max Bill and bought one at the MoMA shop “for what in my early innocent watch days seemed like the astronomical price of a thousand dollars.” The article felt like a permission slip — there are others, just like me? It’s okay to spend a grand on this thing, this thing that does nothing?

More than just a love of watches, the Max Bill managed to induce an appreciation for well-made and thoughtfully designed objects of all types. Perhaps (probably?) this is mostly self-delusional in an attempt to justify the continued pursuit of building a “collection,” whatever that means. The Max Bill introduced me to the idea that objects can be more than just the gadgets and gizmos the Little Mermaid sings about and can open you up to this whole other world of lunacy. 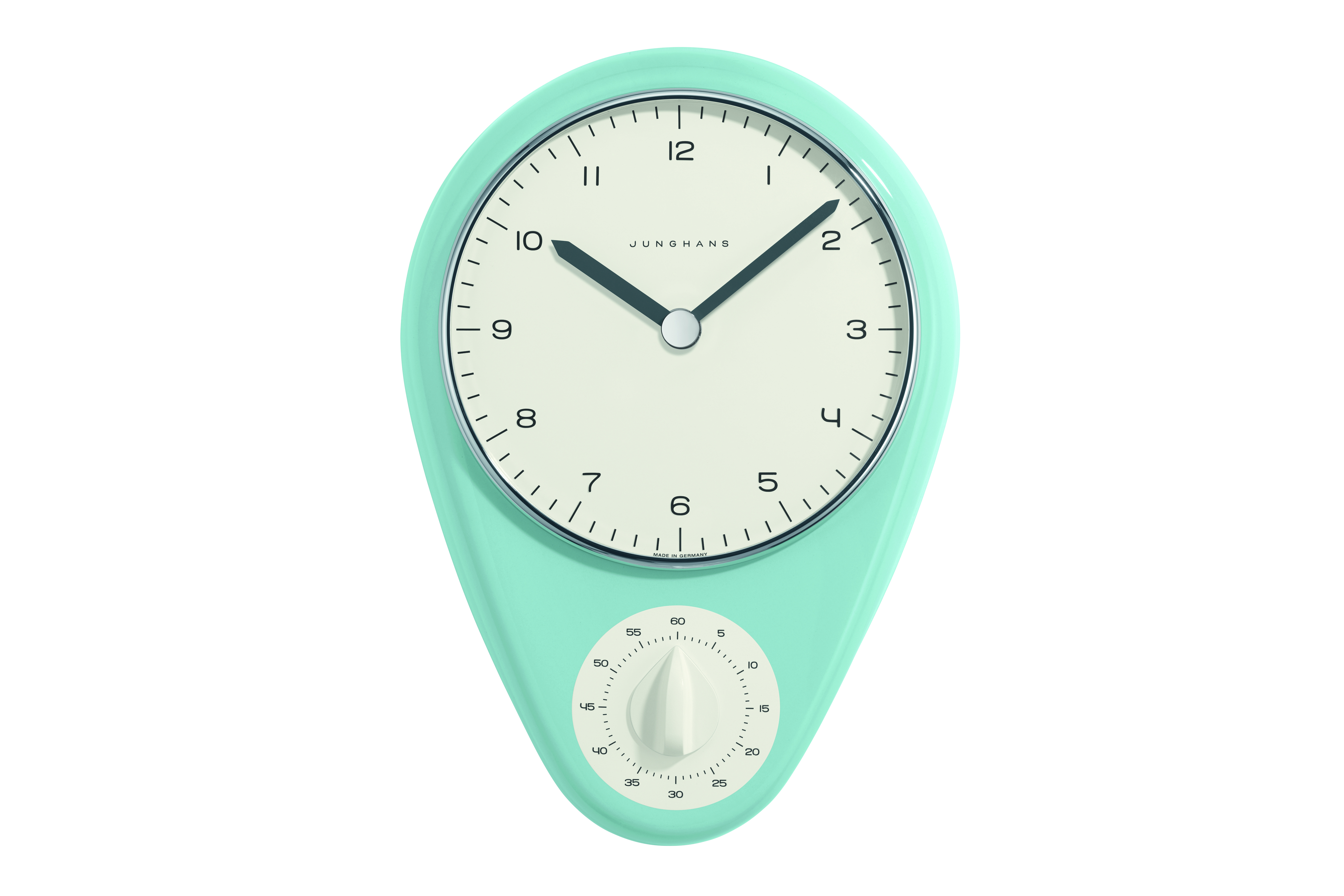 The story of Max Bill and Junghans starts in the late 1950s with the design of his Kitchen Clock with Timer. If you had especially chic grandparents, the type who did things like fly on aeroplanes and listen to even the druggy Beatles records, this piece of modern, functional design might’ve been hanging in their kitchen.

Bill, already an accomplished designer and graduate of the Bauhaus School, happened to be fascinated with time, eventually leading to his partnership with the German brand Junghans. Bill’s grandfather was a watchmaker, so early in life he had developed an affinity for watches.

“Little things? Maybe. I believe that our lives depend on little things,” Bill once told the German newspaper Süddeutsche Zeitung. “And a lot of that time the watch measures for us. That’s why I’m so obsessed with making beautiful, precise timepieces.” 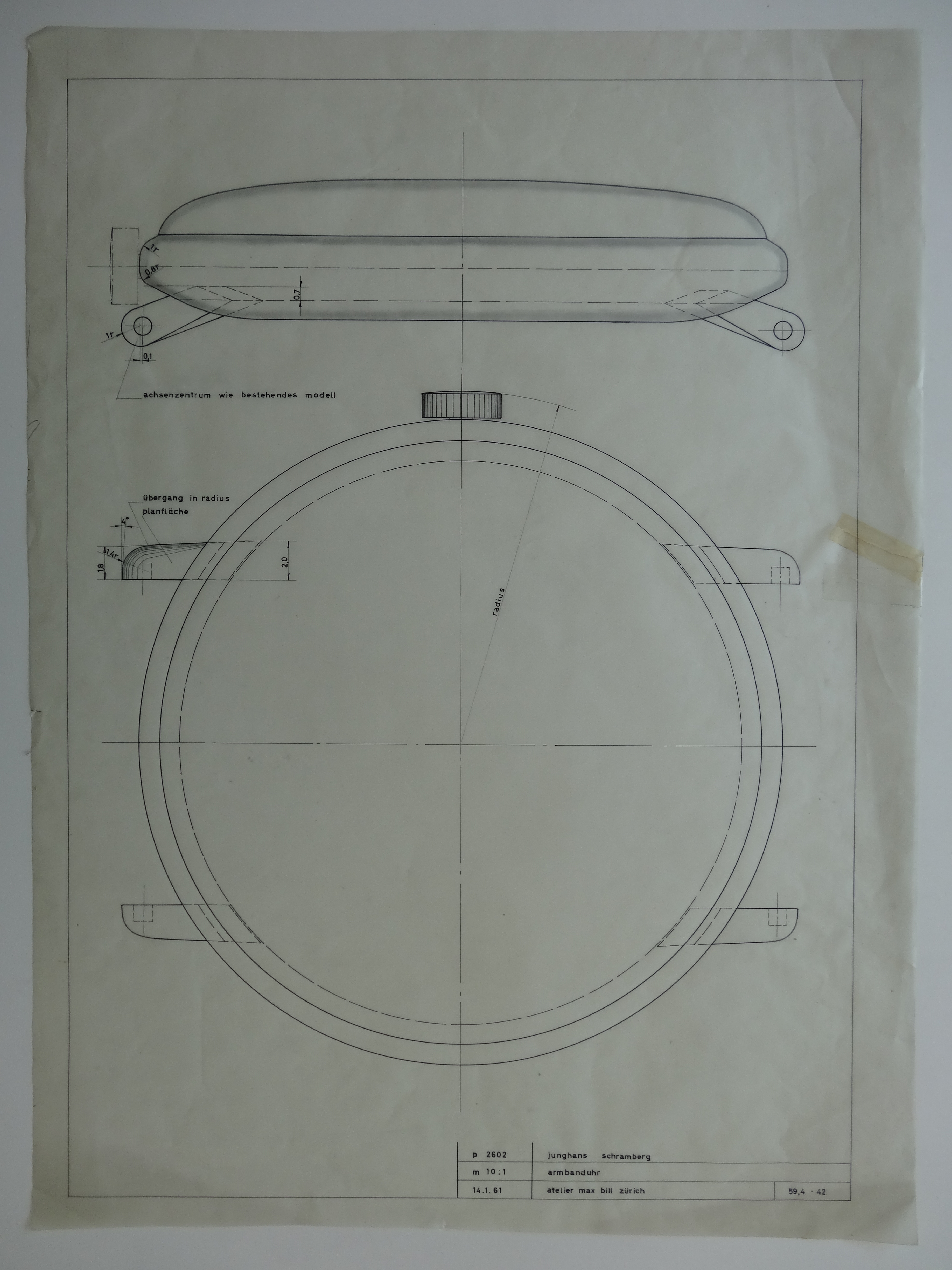 After the success of the Kitchen Clock, Bill and Junghans set out to design wristwatches together.

“I got into designing watches by chance,” Bill explained. “A gentleman came to me one day and told me he was coming on behalf of a watch factory and asked me if I would make watches for his company. I explained that I would be delighted to make watches, but no ‘jewelry watches,’ no temporary seasonal flowers. On the contrary, watches as far away from fashion as possible. As timeless as possible, without forgetting the time.”The result was a series of wristwatches designed by Max Bill, perhaps the first time a trained designer took their protractor and ruler to a wristwatch design.

Now instantly recognizable, Max Bill’s design is defined by a circular case with thin, squared lugs (usually steel, but not exclusively), thin luminous hands, and printed line hour markers, with or without Arabic numerals at the end. But the collection is most notable for what it represents, namely a commitment to Bill’s philosophy that “functional design considers the visual aspect, that is, the beauty, of an object as a component of its function, but not one that overwhelms its other primary functions.”

I’ll resist invoking the cliche about how the shape of an object should primarily follow its intended function, but that’s the gist of it. 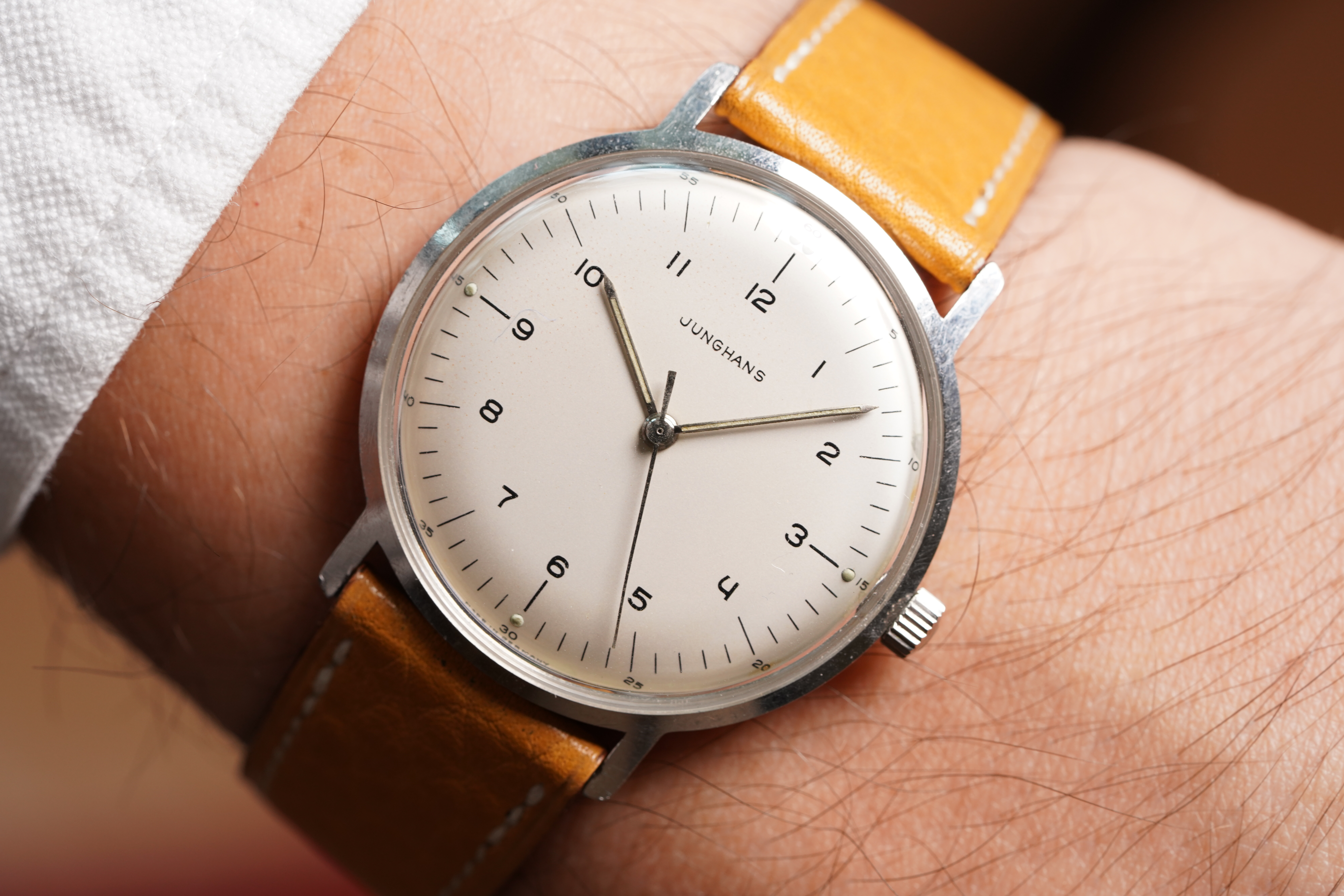 In what should surely have been an indication that I was already slightly unhinged, I wouldn’t settle for the modern incarnation of the Max Bill. No, I wanted one of these original Max Bills from the 1960s, one that felt like it’d been lifted straight from Mr. Bill’s napkin sketches into production (the napkin sketches are my fictionalization of how it must have happened, to be clear).

Not until I finally acquired my own vintage Max Bill did I realize that a modern one might’ve done just fine.

That’s because, 60 years on, the essential form of the Junghans Max Bill remains unchanged.

According to the spec sheet, the modern automatic Max Bill (there are also quartz and manual options, if you want a real bargain) runs about $1,000, with a 38mm steel case and short lugs that make it wear small. The various dial offerings could’ve been pulled out of a 1960s Junghans catalog, nearly unchanged from what Bill must’ve sketched out all those years ago. 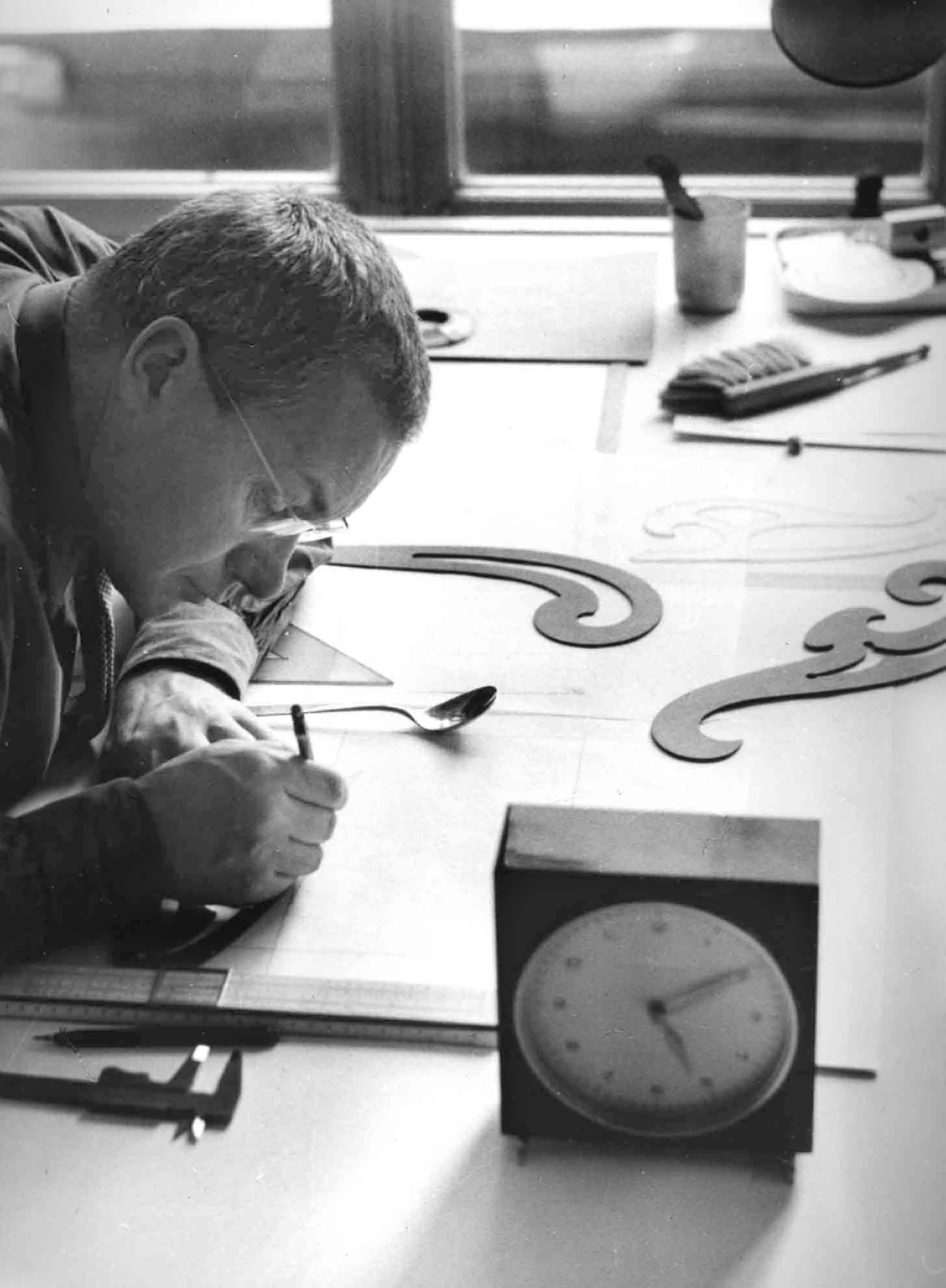 “As timeless as possible, without forgetting the time,” as Bill himself said.

Honestly, there are probably more robust watches for under a grand. Anything from Seiko, for example.

But the Max Bill has something that no other watch does. It’s a legit design lineage, with connections to an artist-designer-architect whose other works legitimately hang on the walls of MoMA or the Art Institute of Chicago.

That’s the beauty of the Max Bill. It’s a value proposition, not as a watch, but as a beautiful object that defies genre.

The magic of the Max Bill is its ability to turn even the most unassuming of us into students of design, obsessing over shapely lugs. 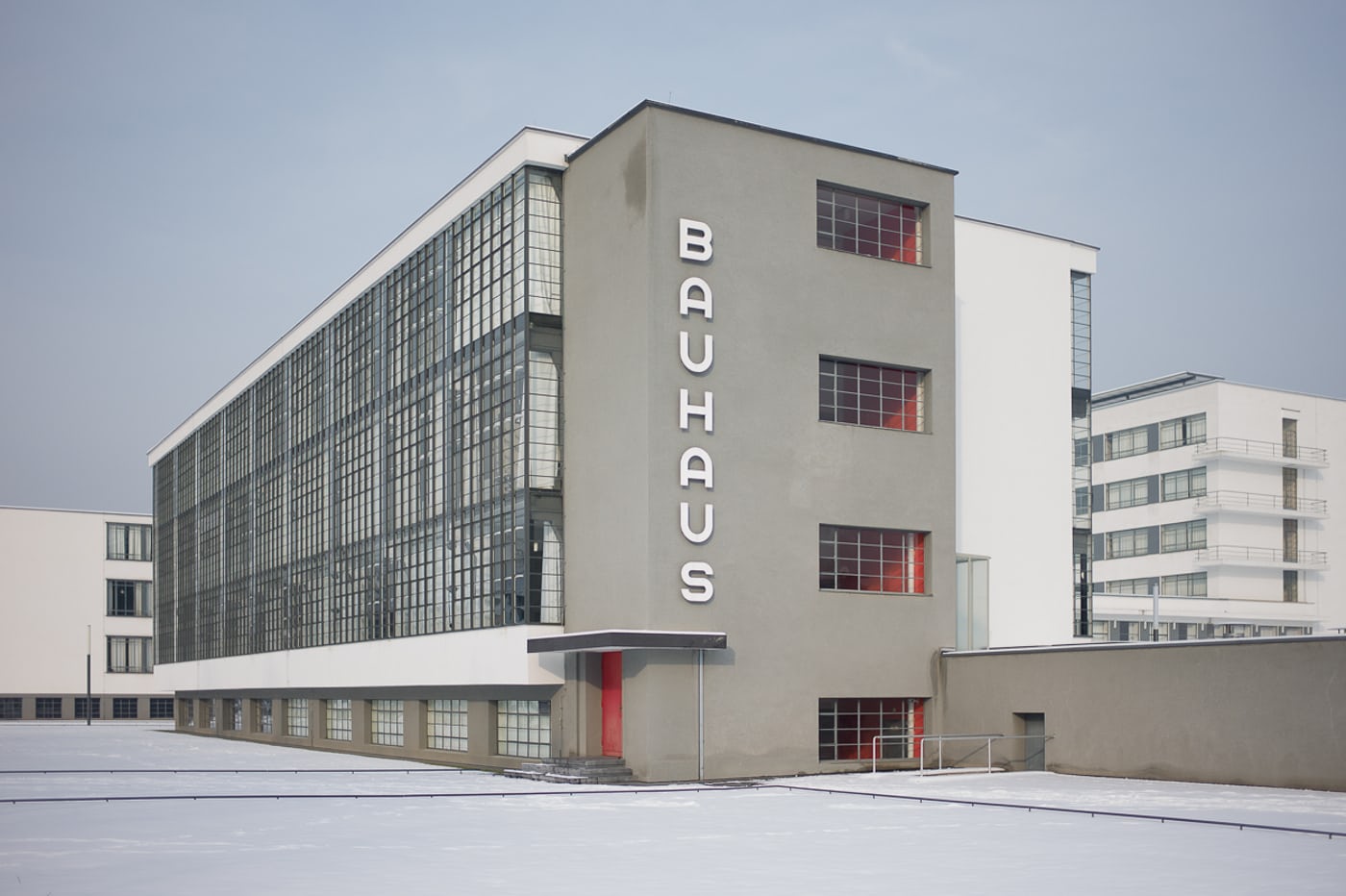 To this day, I couldn’t tell you what movement is inside the Max Bill without looking it up. The caliber is far from the point.

“The basis of any aesthetics should, above all, be function,” Bill once said. “An exemplary object should serve its purpose under all circumstances.”

That might have been true back then for mechanical watches. But these days, function schmunction – we all know quartz does the job better. If mechanical watches have a function in 2021, it’s less about telling the time and more about prodding us to embrace romantic impracticality. And judged by that criteria, this watch is as functional as it’s ever been.

That’s a pretty important lesson. And one you can still have today, with your own Max Bill, for about a thousand bucks.